Today I had to diagnose a problem with a Windows Scheduled Task that was sporadically failing with a non-zero return code. The exe in question was a .NET console application that was throwing an exception before Main() got called; it was outside our try-catch block.

To capture the output of the scheduled task, I redirected it to a text file with the following command:

The > symbol redirects the output to a file; >> makes it append instead of creating a new blank file each time it runs. 2>&1 makes it include the output from stderr with stdout — without it you won’t see any errors in your logs. 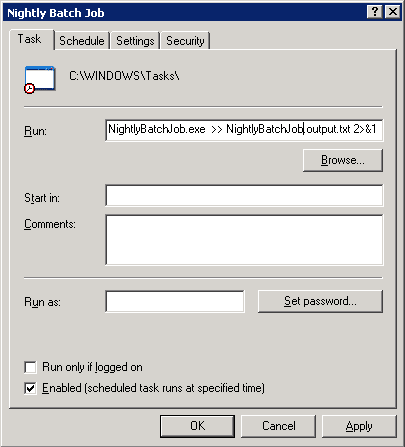 The whole command is run in a new cmd.exe instance, because just running an .exe directly from a scheduled task doesn’t seem to produce any console output at all. For more posts on this subject, go back to the homepage.