One question that came up several times at DDD eXchange last week was CQRS: now we understand all the benefits, how do we begin migrating our existing applications towards this sort of architecture?

It’s something we’ve been chipping away at at work recently, and over a short series of posts I’d like to share some of the conventions and patterns we’ve been using to migrate traditional WPF client/WCF server systems towards a CQRS-aware architecture.

Command-Query Responsibility Segregation (CQRS) is based around a few key assumptions:

CQRS completely separates (segregates) commands and queries at an architectural level, so each side can be designed and scaled independently of the other.

Each method on our WCF service must be either a command or a query. Let’s start with commands.

Each command method on your service must:

Commands carry all the information they need for someone to execute them — e.g. a command for booking a restaurant would tell us who is coming, when the booking is for, contact details, and any special requests (e.g. someone’s birthday). Commands like these are a special case of the Parameter Object pattern.

Now we’ve got our command defined, here’s the corresponding method on the WCF service endpoint:

One class per command

Command DTO classes are never re-used outside their single use case. For example, in the situation a customer wishes to change their booking (e.g. change it to a different day, or invite more friends), you would create a whole new ChangeBookingCommand, even though it may have all the same properties as the original BookTableCommand.

Why bother? Why not just create a single, general-purpose booking DTO and use it everywhere? Because:

What if I only need one parameter? Do I need a whole command DTO for that?

Say you had a command that only carried a reference to an object — its ID:

Is it still worth creating an entire command DTO here? Why not just pass the GUID directly?

Actually, it doesn’t matter how many parameters there are:

Why not just one overloaded Execute() method?

Instead of having one operation contract per command, why don’t you just use a single overloaded method like this?

You can but I wouldn’t recommend it. We’re still doing SOA here — a totally-generic contract like this makes it much harder for things like service discovery and other clients to see the endpoint’s capabilities. Discover more solutions like this one! 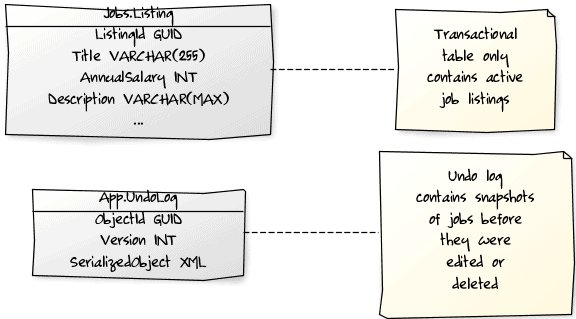