Over the past week, I’ve been converting a bunch of unit tests written with NUnit to Microsoft’s MSTest framework, the tool of choice for this particular project.

I’m not a big fan of either the MSTest framework, nor Visual Studio’s in-built test runner. It feels like you’re running unit tests in Access. Plus, the last thing my Visual Studio needs is to be cluttered up with more windows and toolbars.

Anyway, here’s where Gallio comes in. It’s a open source, framework-agnostic test runner that supports MbUnit, MSTest, NBehave, NUnit, and xUnit.Net frameworks. Running tests is quite similar to NUnit — you add test assembly paths to a .gallio project file and fire them up in Icarus, Gallio’s graphical test runner: 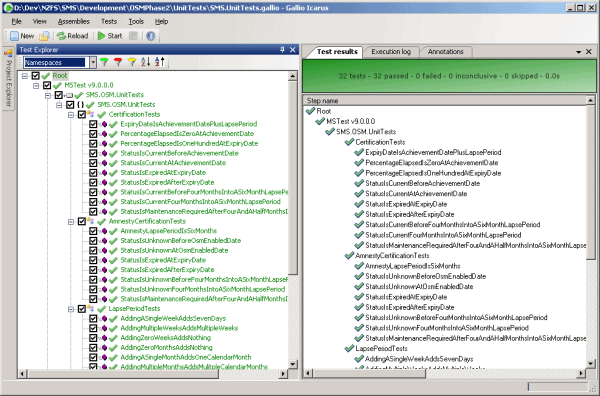 As well as being a nicer test runner for MSTest, Gallio is ideal for managing tests in a mixed-framework environment. It also integrates with MSBuild, NAnt, CruiseControl.NET for automated testing during your build process.