There are already a couple of patterns for handling 404 errors in ASP.NET MVC.

But what happens when a user invokes a valid action on a valid controller, and the requested resource — product, article, sub-category etc — doesn’t exist? Let’s investigate some of the options available.

Classic ASP.NET custom errors: easy, but not that great

The easiest option is to use ASP.NET’s custom errors feature, redirecting users to special pages according to the status code of the exception that was caught.

All you need to do is to uncomment the following section from your web.config, and create a new file called FileNotFound.htm:

Then you can start throwing 404 HttpExceptions from your action method.

When a user requests the detail for a non-existent product, here’s what they’ll see with a static FileNotFound.htm 404 page (style copied from the application’s MasterPage):

This method is very easy to implement but has a few disadvantages — particularly from the user’s point of view.

While they do arguably work, ASP.NET custom errors are clearly not the best tool for the job.

The next option is the ASP.NET MVC framework’s built in HandleErrorAttribute, which renders a special error view when uncaught exceptions are thrown from a controller action.

Anyway, in this example, when an action throws a ResourceNotFoundException, the HandleErrorAttribute filter will catch it and render a view called ResourceNotFound. If you don’t specify a view, HandleErrorAttribute will look for a default view called Error. I have chosen to use a different one, because I don’t want 404 errors reported in the same way as general application errors.

This renders better results — no URL redirection, and the code is contained within the ASP.NET MVC framework. However, there’s still a problem. 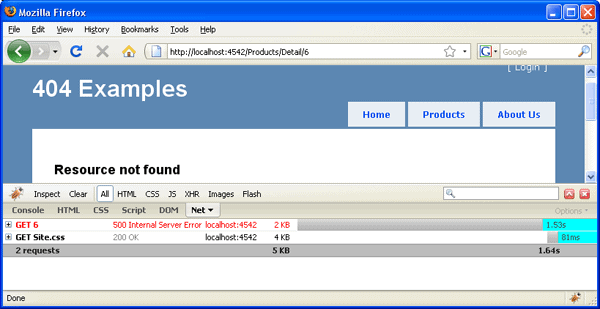 As you can see, the invalid resource request is coming back as a 500 Server Error. This isn’t by any flaw of the HandleErrorAttribute class; it’s simply designed to handle application errors, not 404s. In fact, it will explicitly ignore any exceptions that have an HTTP status code other than 500.

HandleErrorAttribute is a filter — a feature of the ASP.NET MVC framework that allows you to execute before or after a controller action is called, or when an exception is thrown. They’re great for checking authentication, logging page requests, exception handling and other cross-cutting concerns.

Here’s a filter I’ve created — it’s effectively a clone of the built in HandleErrorAttribute, except that it ignores everything except ResourceNotFoundExceptions, and it sets the HTTP status code to 404 instead of 500.

As with HandleErrorAttribute, you simply decorate the controller class with a HandleResourceNotFound attribute.

This filter produces very similar output to that of the HandleErrorAttribute, but with the correct 404 HTTP status code. This is exactly what we want — an easy-to-generate 404 status code, raised and presented within the ASP.NET MVC framework.

In part 2 of this article, I’ll discuss methods for improving the quality of these error pages, and why a single generic 404 error page isn’t sufficient for a modern, rich web application.