I have just got a new computer at work, and over the past week I have been installing all the software that I like to use. One tool I rely on is IISAdmin, a program that sits in the system tray and allows you to run multiple IIS websites under non-server editions of Windows. Unfortunately, when I tried to install it under Window Vista, it failed with the message “Error 1904. Module C:Program Filesiisadminztray.ocx failed to register. HRESULT -2147024770. Contact your support personnel.” 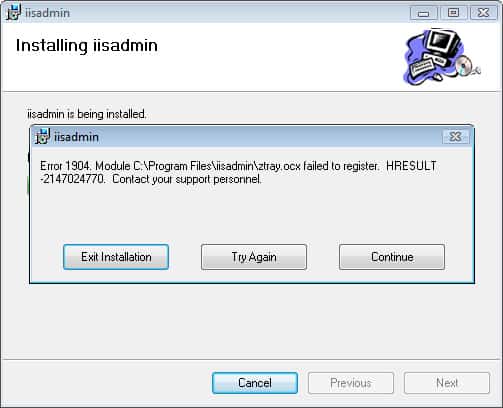 Attempting to manually register the module with RegSvr32 didn’t work either:

I couldn’t find anything searching for either of the error messages, so I did some digging on the module itself. It turns out that ztray.ocx is an old (1997) ActiveX control that allows programs to add an icon to the system tray.

I eventually found Dependency Walker, a tool that scans Windows modules for dependencies. I opened up ztray.ocx to see if it was missing anything. 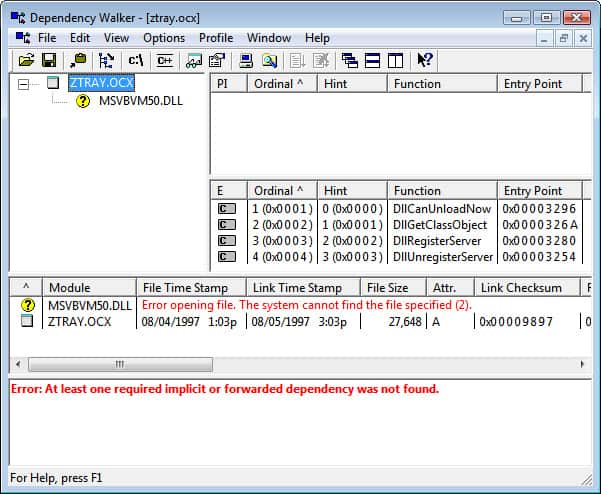 As you can see, ztray.ocx makes calls to a module called msvbvm50.dll, part of the Visual Basic 5.0 run-time. This package is present in Windows XP, but appears to have been dropped from Vista. Luckily it is still available as a free download from Microsoft. Installing it solved the dependency problem, and I was able to install IISAdmin successfully.